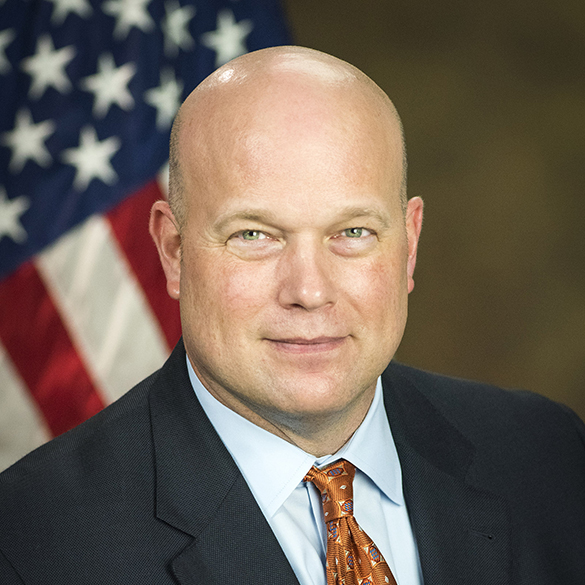 Matthew G. Whitaker advises clients on a range of legal issues by leveraging his past experience at the highest levels of leadership within the Department of Justice, including service as acting Attorney General of the United States, serving as in-house counsel to a Fortune 100 company and representing clients in private practice through a range of complex criminal and civil litigation matters.

During his tenure as acting Attorney General (2018-2019), Whitaker’s achievements included focusing on reducing violent crime and arresting the opioid epidemic, in addition to combating terrorism and other department priorities. Whitaker signed the automatic weapons bump stock ban and supervised the Mueller investigation into Russian interference in the 2016 presidential election. Prior to becoming acting Attorney General, Whitaker also served as Chief of Staff to Attorney General Jeff Sessions.

Additionally, Whitaker had previously served as the United States Attorney for the Southern District of Iowa from 2004 to 2009, where he obtained invaluable insight and experience regarding the enforcement of federal crimes, including mail and wire fraud, public corruption, child pornography, firearms violations, drug trafficking, corporate fraud, and terrorism financing. In addition, Whitaker was responsible for defending civil lawsuits brought against the United States, handling federal forfeiture actions, and collecting debts and restitution.

In his role as U.S. Attorney, Whitaker served on the Controlled Substances and Asset Forfeiture Subcommittee of the Attorney General’s Advisory Committee, a group of 30 United States Attorneys across the country focusing on the Department of Justice’s efforts against drug trafficking. Additionally, he was a member of the Violent and Organized Crime Subcommittee and the White Collar Crime Subcommittee of the Attorney General’s Advisory Committee.

Following graduation from the University of Iowa in 1995, Whitaker moved to the Twin Cities, where he worked in private practice. In 1998, he joined a Fortune 100 company as corporate counsel. In 2001, Whitaker and his family moved back to Iowa, where he rejoined private practice until his appointment as United States Attorney. In 2002, Whitaker ran for State Treasurer of Iowa.

In 2009, Whitaker formed the law firm of Whitaker Hagenow & Gustoff LLP in Des Moines and Cedar Rapids, which had a strategic working relationship with Graves Garrett. During that time, he represented businesses and individuals in complex criminal and civil matters.

In addition, Whitaker ran for U.S. Senate in 2014, which led to him serving a three-year tenure as Executive Director of the Foundation for Accountability and Civic Trust (FACT) in Washington, D.C. In 2017, Whitaker was also a contributor for CNN, appearing often to discuss the legal issues of the moment.

While at the University of Iowa, Whitaker was a tight end on the 1990 Big Ten Champion football team and played in the 1991 Rose Bowl game versus Washington and the 1991 Holiday Bowl versus BYU. During his time as a student-athlete, Whitaker earned academic All-Big Ten honors in 1990, 1991 and 1992. Whitaker also received the prestigious Big Ten Medal of Honor in 1992. The Big Ten’s oldest award, the Medal of Honor, first awarded in 1914, is given annually to one student in the graduating class of each university who demonstrated proficiency in scholarship and athletics.