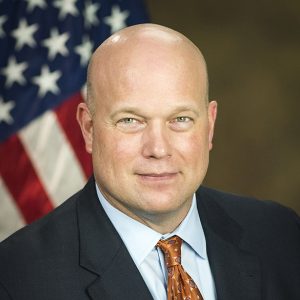 Graves Garrett is pleased to announce that Matthew Whitaker, former acting attorney general of the United States, has joined the firm effective Aug. 1, 2019.

“Our firm has enjoyed a long-standing relationship with Matt both in private practice and in his official capacity with the Department of Justice,” Graves Garrett Partner Todd Graves said. “We are pleased to have him join us as we advise clients on a range of matters that will benefit from his experience working at the highest levels of leadership within the federal government, as well as his former experience in private practice and in-house counsel roles.”

Graves Garrett has intentionally grown a practice that boasts one of the highest concentrations of former federal and state government attorneys in the nation. For instance, Todd Graves is a former U.S. attorney for the Western District of Missouri, and Partner Nathan Garrett is a former FBI special agent and assistant U.S. attorney who served as chief of the National Security and Terrorism Section in the United States Attorney’s Office.

Whitaker’s experience bolsters the firm’s strength in this regard, given his additional experience as acting attorney general of the United States as well as having served in numerous other leadership roles within the federal government, including chief of staff to former U.S. Attorney General Jeff Sessions. Whitaker is also a former U.S. attorney for the Southern District of Iowa, which was a presidentially appointed position he held from 2004 to 2009.

His experience also includes serving as managing partner of the Des Moines-based law firm Whitaker Hagenow & Gustoff LLP from 2009 until rejoining the Department of Justice in 2017. During his time with Whitaker Hagenow & Gustoff, the firm had established a strategic relationship with Graves Garrett, which allowed the firms to work together on unique matters that drew on the experience and strengths of both firms.

Whitaker’s background also includes serving in an in-house counsel role for a Fortune 100 company, as well as the executive director for FACT, The Foundation for Accountability & Civic Trust, between 2014 and 2017.

Whitaker graduated with a Master of Business Administration, Juris Doctor, and Bachelor of Arts from the University of Iowa. While at Iowa, Whitaker was a three-year letterman on the football team and he received the prestigious Big Ten Medal of Honor.