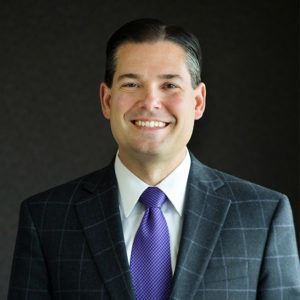 Erik Bendorf, board president of the Catholic Lawyers Guild, presented Greim with the award, given annually to a Guild member whose conduct in their practice and parish life is according to the standards of St. Thomas More. Greim is a member of the guild board, married with five daughters and active with Visitation Parish and School in Kansas City.

The Catholic Lawyers Guild of Kansas City and Catholic Bar Association host the Red Mass each year as part of a centuries-old tradition — first celebrated in 1245 in Paris and later spreading across Europe, offered just before an opening Court term and also as the opening of the judicial year of the Holy See’s Tribunal, the Sacred Roman Rota. The first Kansas City-area Red Mass occurred in the 1950s and was later revived in 2006, when the Catholic Lawyers Guild of Kansas City formed.